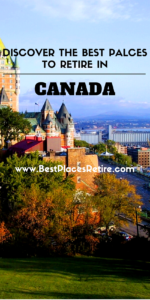 Where you choose to retire will depend on a few things ” the cost of living, budget, family, and local services ” but for most people, taking advantage of the natural beauty of the Great White North is quite high on the list. Of course, finding the right community where you can spend the most rewarding part of your life is truly golden.

Although Canada is not a sun-and-surf destination, it has plenty of advantages. For starters, English is the official language (along with French), and compared to the USA, the cultural differences are more or less insignificant. Canada also enjoys some of the lowest crime rates, has affordable housing, and is in close proximity to the U.S. border. The financial incentives in Canada coupled with an incredible healthcare are the icing on the cake, considering that they are unmatched by any of the 50 states in America. 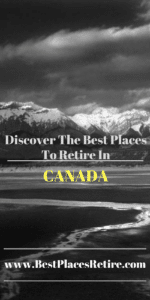 Moreover, their economic and social policies are more liberal, although there are some drawbacks too. For instance, Canada is still a foreign country for American retirees, meaning that residency could become an issue. Plus, the Canadian migration law is somewhat stricter in the recent years, and can be a hassle for those short on money. Nonetheless, although Canada probably won’t make it as a top contender for the cheapest countries for retirement, it’s certainly more affordable than the US, and provides some of the best places to retire Canada.

Here are more reasons why you should consider retiring in Canada:

The high cost of healthcare services is one of the most prolific issues facing retirees in America. The U.S. has the most expensive healthcare system in the world, and it’s not a surprise that medical bills are the primal cause of bankruptcy in the country. According to NerdWallet Health, a price comparison website, over two-thirds of American seniors that file for bankruptcy state health issues as the reason.

Although Canada’s healthcare is far from perfect, it’s taxpayer funded system has a significantly lower financial burden on the individuals. Keep in mind that Americans who move into Canada are eligible to use the universal healthcare system in the country, once they have applied for and received a permanent resident status. This means that if you are an American citizen, you won’t have to become a Canadian citizen first in order to access the healthcare benefits in the country.

The high cost of prescription drugs in America is another major issue that bedevil the seniors. In a study conducted in 2015, Bloomberg News found out that an American pays considerably more to pay for any types of prescription drug to treat anything from asthma and high cholesterol to cancer and diabetes than any other country in the world.

There are many reasons why Americans pay higher for prescription drugs, but in Canada, there are pharmacare programs in place in each of its territories and provinces, which are designed to keep the cost of prescription medication accessible at an affordable price. In addition, in provinces like Ontario, persons ages 65 and above qualify for a Drug Benefit Program. With it, seniors need to pay $100 for their medication each year, after which they pay no more than $6.11 every time they need their prescription filled. For low-income seniors, the cost of prescription drugs is waived completely. 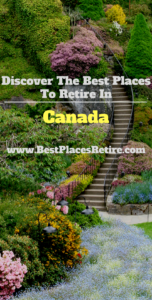 Culture shock can be a major issue when it comes to retiring in a foreign country. Adjustment can be quite difficult if you choose to move into an exotic and more affordable place like Brazil, from language barriers and substandard infrastructure to lax banking systems and cultural differences. Even in countries like England where language barrier is not an issue, Americans need to adjust to driving on the other side of the road.

However, most of these issues are absent in Canada, considering that about 75% of Canadians live 100 miles of the US border. This means that most Canadians often watch American TV shows, follow American politics, cheer American teams, and even eat at American restaurants like Applebee’s and McDonald’s. in terms of culture, Canadians are very similar to Americans, and living there won’t be an issue for most people. You only need to get comfortable with the metric system. 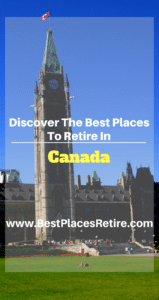 The major urban establishments in Canada such as Toronto and Vancouver have housing prices as high as in big U.S. cities like New York City and Chicago. Nonetheless, the rest of the country has affordable and reasonably priced real estate. Even in some of the incredibly picturesque places such as Vancouver Island and Prince Edward, the housing costs are some of the most affordable in the country, and make up some of the best places to retire Canada. Moreover, the process of buying property in Canada is straightforward, and the banking system there is stable.

Proximity to the U.S

As we’ve mentioned, over 75% of Canadians residing within 100 miles of the American borders. Canadian cities from Vancouver to Ottawa can drive to the U.S. border in an hour or so. Such a close proximity is beneficial to the American retirees who choose to settle in Canada, as they can visit their loved ones quickly, conveniently, and not have to deal with taking long hour flights or incur high air travel fares. Plus, in case of an emergency, people can easily cross the long, undefended border to reach their family members.

With the reasons discussed above, Canada is a great option for retirees who want to save some cash on some of the biggest expenses seniors have to face, without sacrificing on comfort. The affordable healthcare and rather inexpensive housing makes Canada a top recommendation. 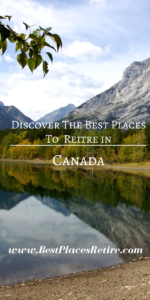 Now, let’s look at some of the 10 best places to retire Canada

In the 2013 film, The Grand Seduction, the filmmakers chose Trinity Bight to play “Tickle Cove”, which is not a surprise. This secluded fishing town has some of the most scenic coastal views, with limitless ocean vistas, boardwalk paths, and an authentic salt scrubbed Newfie personality. The town is generally sparsely populated, but Trinity Bight features an art gallery, a theatre community, and a few B&Bs. The winter bluster and the isolation of the town might scare some people away, but this town remains a great place for adventurers who love nature and want to experience and enjoy the truly wild beauty of Eastern Canada.

Although the largest city in Canada doesn’t sound like a role model place for retirement, you’d be surprised to find out what it actually offer for seniors. Given the vastness of the city, Toronto provides a plenty of suburban neighborhoods, which are generally better suited for retirees than some of the traditional smaller areas.

Additionally, since there are over two physicians per 1,000 inhabitants in Toronto, you will always be close to a doctor. Also, there’s an average of 714 mm of precipitation, and about 264 days with a minimum daily temperature of above 0 degrees, which translates into a suitable weather that can serve most people well.

Just a stone throw away from the lively Niagara falls, this city is any retiree’s dream. This picturesque city in Southern Ontario is home to several historic sits, heritage properties, and high end restaurants. In fact, the city has been a major filming location for many Hollywood films, owing to its natural beauty. Moreover, the climate in Niagara-on-the-Lake is mild, making it ideal as a growing environment, and the surrounding is filled with countless vineyards and orchards. There’s really no better excuse to spend your day cycling from one winery to another looking for your new favorite wine. 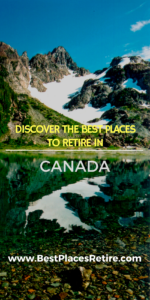 One of the most adored mountain towns in Canada is Banff, but it’s also trendy, expensive, and mostly crammed with tourists. Fortunately, Canmore is in close proximity. Canmore boast 3.7 physicians per 1,000 residents, 159 day of above zero minimum temperature, and only 322 mm of rainfall a year. It offers similar hiking and skiing opportunities as Banff, but in a more laid back, affordable locale. Aside from the rugged natural setting, Canmore provides a few other luxuries including restaurants, spas, and golf courses. For those looking for unique diversions, you can check out the Canmore highland games or try out dogsledding.

British Columbia top retirement communities can boast of the mild weather, but this generally comes at a cost, including a surplus of overcast ad rainy days. If you prefer the greener grass, then Estevan should be on top of your list. This is Canada’s sunshine capital, which boasts the most sunny days per year. In this town of 10,000, there’s a strong community vibe, and aside from the numerous sporting facilities that include a great golf course, the town has a local art council and an active theatre group. There are also a number of opportunities to volunteer or get involved in. 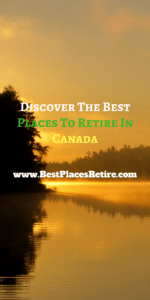 As the second largest city in New Brunswick, the community is still relatively small. But, there are all the urban amenities you might need, and this bilingual city of 70,000 still has the feel of a small community. Outdoor enthusiasts can delight themselves in the two national parks and a few wildlife reserves located within an hour’s drive. The more popular Moncton’s Centennial Park is home to tennis and lawn bowling facilities, and some lighted hiking trails and cross country skiing.

This capital of Alberta is the fifth largest city in Canada, which might seem an odd choice at first, but things aren’t that simple. The city provides countless opportunities for the prospective retirees, among which include the 2.49% property tax (close to the average in Canada), and at least 2.9 physicians per 1,000 citizens. Although the city is located in the mid-western part of Canada, it has plenty of non-rainy days with precipitation averaging at 348 mm. Nonetheless, with 185 days of above zero minimum temperatures, the city is somewhat cold. 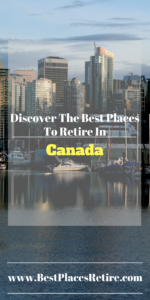 Vernon is quite far from the Pacific Ocean, meaning that it receives an average of 333 mm of rainfall. At the same time, the city has over 249 days of above zero degree, meaning that the weather here is relatively suitable for retirees. With 3 physicians per 1,000 residents, and a property tax of 2.81% this is certainly not a bad place to enjoy your retirement. Keep in mind that despite a slightly higher property tax, property in Vernon is not expensive. 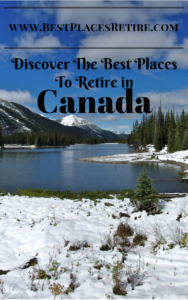 This is the largest city in the Canadian west coast, and certainly doesn’t need much introduction. It’s the perfect place for those who plan to retire in Canada, but still crave the urban setting. Although the property is slightly more expensive here, the property tax of only 1.72% counters this, and to add on its perks, you won’t ever find yourself in jeopardy from lacking professional medical help, considering the city has 2.5 doctors per 1,000 inhabitants. You’ll have to love the rain because the city experiences on average 1,231 mm of rainfall a year, and there are 331 days with the minimum temperatures above zero degrees.

If there were competitions for the cutest cities in Canada, Victoria would easily own the crown. Historic buildings poke out along the streets lined with charming trees, and the walking paths wind on the glittering pacific coast, and the tulips do bloom on every available patch, making it one of the best scenes you can find. There are 3.1 physicians per 1,000 inhabitants of Victoria, 319 day of warm daily temperatures, and an average of 845 mm of rainfall a year.

Victoria boasts Canada’s mildest climate, and thanks to the Olympic mountains located in the Washington State, the city is shielded from the rains that hit Vancouver, its metropolitan neighbor. For those that need a bit more excitement from time to time, taking a ferry ride into the big city is a convenient option. Overall, Vitoria is close and connected to a number of diversions and getaways, including golf, boating, wine, art, and culture. All this add up to make Victoria one of the best places to retire Canada that any retiree would want, and twice the charm!