Have you ever thought about retiring in Texas? Maybe not. That is, unless you already live in Texas. You can certainly understand what makes it one of the best places to retire in America.

The problem for a lot of people nearing retirement is that most everything they think they know about Texas just isn’t true.

Texas is flat as a pancake, right? Wrong. It has some beautiful hill country and some great beaches. Texas is just a bunch of dusty, old ranches right? Wrong. Texas has some great cities like Austin, Houston and Dallas that offer all the culture anyone could ever ask for. However, neither are great places to retire as they offer all the good things but also all the negatives of any large metro area.

Here, then are three of the best places to retire in Texas.

This city has several special attractions, not the least of which is its River Walk.  The Walk is actually a public park that is open 365 days a year. The river that flows through the part is lined with hotel attractions, restaurants and more. It boasts lush landscapes, waterfalls and quiet pathways.

In addition to the River Walk, San Antonio has Six Flags Fiesta Texas, SeaWorld San Antonio and the McNay Art Museum. It also sports Mexican markets, unique crafts, flea markets, farmers markets and antiques and enough restaurants to please even the choosiest of foodies. If local art and antiques is your thing, there is Artisans Alley, El Mercado and La Villita.

Here is a fact that might surprise you. San Antonio is the second largest city in Texas with a population of 1.33 million. It has a strong armed forces presence, including Fort Sam Houston, Lackland Air Force Base, Randolph Air Force Base, Camp Bullis and Camp Stanley.  It is home to five Fortune 500 companies and to the South Texas Medical Center

San Antonio lies near the edge of the humid subtropical climate zone. Its weather may be dry or human depending on prevailing winds. As you would imagine, it turns hot in the summer but has warm to cool winters. It is comfortably warm and rainy in the spring and fall.

Austin is both the capital of Texas and the home of the University of Texas. It’s located in central Texas on the eastern edge of the American Southwest. It is Texas’s fourth largest city and it is named for Stephen F Austin who is known as the father of Texas.

The city has become quite a technological center as it plays home to many high-tech companies, including Freescale Semiconductor and Dell computers.  In fact, it has so many development centers for technology corporations that in the 1990s, it adopted the nickname “Silicon Hills”. In terms of population, the city offers a diverse mix that consists of students, politicians, state employees, high-tech workers, blue-collar workers, and university professors. 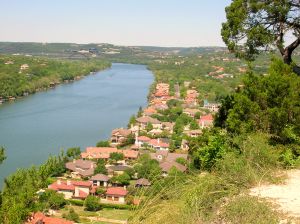 The city has a humid south tropical climate characterized by very hot summers with prevailing humid winds from the Gulf of Mexico. However, it does have mild winters. Austin receives 33.6 inches of rain per year on the average with most of it coming in the spring. The summers are usually hot and humid with average July and August temperatures in the mid-90s.

Austin hosts one of America’s largest festivals called South By Southwest (SXSW) and has more than 50 public swimming pools. Austin has parks throughout the city and offers activities such as rock climbing, swimming, kayaking, exploring and hiking along its greenbelt.

Marble Falls, Texas may just be the best places to retire you’ve never heard of. It’s a little city (population 4959 at the 2000 census) located about 40 miles northwest of Austin. Lake Marble Falls is part of the Highland Lakes, which is the largest chain of lakes in Texas.

The city is a popular vacation spot for boaters and fishermen, campers and hunters. If you’re interested in sort of offbeat sports, you might like to know that Marble Falls posts one of the largest drag boat races in the United States.

Lake Marble Falls is the result of a dam being built on the Colorado River. Before the dam was built there were falls of marble, which gave the city its name. However today, the falls are underwater and only visible on rare occasions when the lake is lowered for repairs.

The city boasts approximately 111 acres of parkland and 13 parks. Two of these parks, Lakeside and Johnson Part are next to one another and are used for some of the city’s largest special events such as Springfest and, of course, the Lakefest Drag Boat Races.

Naturally, there are other cities in Texas that represent good places to retire but Austin, San Antonio and Marble Falls are certainly places worth considering as best places to retire in Texas.